Onna between past and future: an interactive installation

Onna between past and future: an interactive installation

On April 6, was opened the “Infobox” housing the virtual museum of the town of Onna (L’Aquila), destroyed by the earthquake of 2009, at the presence of the mayor of L’Aquila and other institutional representatives.

An interactive wall for the virtual museum, commissioned to MICC in 2011, has been designed, developed and, in the last days, installed in the Infobox by Gianpaolo D’Amico, Andrea Ferracani, Lea Landucci and Daniele Pezzatini, under the supervision of professor Alberto Del Bimbo.

The project aims at informing visitors about the historical buildings, traditions and the way of life of Onna before the terrible earthquake in 2009 through videos, photos and live interviews.

The Onna Onlus (non-profit organization) and the citizens of Onna are trying to gradually rebuild the town affected by the earthquake and raise awareness of the work of reconstruction among local people and visitors. The goal is to properly communicate the past events and the efforts invested building a museum in memory of Onna in which the interactive exhibit has been housed.

The installation has been developed as an environment in which visitors of the museum can interact with a natural interface system and then discover information about the disaster and the local history via multimedia contents. The installation presents a central three meters wide projection representing the aereal view of the the town after the earthquake. By touching one of active areas of the interface, a zone of the town will appear as it was before and, hopefully, as it will be after the reconstruction. Two lateral projections are used to reproduce videos and interviews related to the active areas. An infrared camera with a diffuse IR illumination system has been adopted in order to detect users hands interactions with the surface. Multiple users can interact with the surface simultaneously, since up to two areas can be activated at the same time.

In the BSc Thesis project of Lorenzo Usai we exploited the OpenNI library together with the NITE middleware to track the hands of multiple users. The depth imagery allowed us to obtain a precise segmentation of the user hands.

Segmented RGB hand images are normalized with respect to the orientation and a fast descriptor based on an adaptation of SURF features is extracted; we train an SVM classifier with ~31000 images of 8 different subjecs to recognize hand poses (open/close).

A Kalman filter is used at the end of our recognition pipeline to smooth the prediction results, removing peaks of rare occasional failures of the hand pose classifier. The resulting recognition systems run at 15 frames per second and has an accuracy of 97.97% (tested on data independent from the training set). 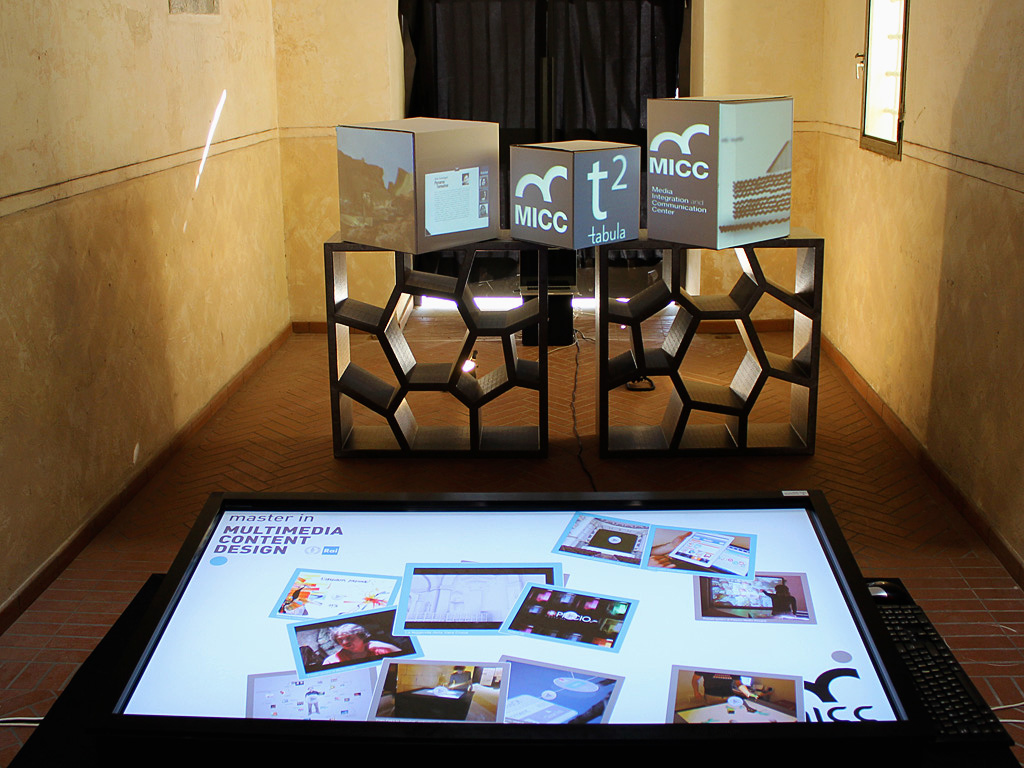 Thursday, March 15 was inaugurated the Urban Innovation Park hosted at “Le Murate”. The area has been designed to host, inside the walls of the former jail, research centers and innovative business companies that operate for the promotion and enhancement of cultural and artistic heritage.

Our research center MICC will use the spaces of the Park as a place of experimentation and technological social networking. The center will organize interactive installations, digital theme nights, conferences, lectures and will work with the students of the Master in Multimedia Content Design of the University of Florence for the ideation of innovative projects about the world of multimedia. 4HUS8Z47HQ66