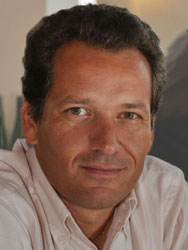 Benoit Huet is Assistant Professor in the Data Science Department of EURECOM (France). He received his BSc degree in computer science and engineering from the École Supérieure de Technologie Électrique (Groupe ESIEE, France) in 1992. In 1993, he was awarded the MSc degree in Artificial Intelligence from the University of Westminster (UK) with distinction, where he then spent two years working as a research and teaching assistant. He received his DPhil degree in Computer Science from the University of York (UK) for his research on the topic of object recognition from large databases. He was awarded the HDR (Habilitation to Direct Research) from the University of Nice Sophia Antipolis, France, in October 2012 on the topic of Multimedia Content Understanding: Bringing Context to Content. He is associate editor for IEEE Multimedia Magazine, IEEE Transaction on Multimedia, Multimedia Tools and Application (Springer) and Multimedia Systems (Springer) and has been guest editor for a number of special issues (EURASIP Journal on Image and Video Processing, IEEE Multimedia, etc…).

He regularly serves on the technical program committee of the top conference of the field (ACM MM/ICMR, IEEE ICME/ICIP). He chaired the following international conference: MMM2019, PCM2014 and multiple workshops. He is Technical Program co-Chair of ACM Multimedia 2016. He was chairing the IEEE MMTC Interest Group on Visual Analysis, Interaction and Content Management (VAIG) from 2010-1014. He has co-authored over 150 papers in Books, Journals and International conferences. His current research interests include Large Scale Multimedia Content Analysis, Mining and Indexing – Multimodal Fusion – Socially-Aware Multimedia.