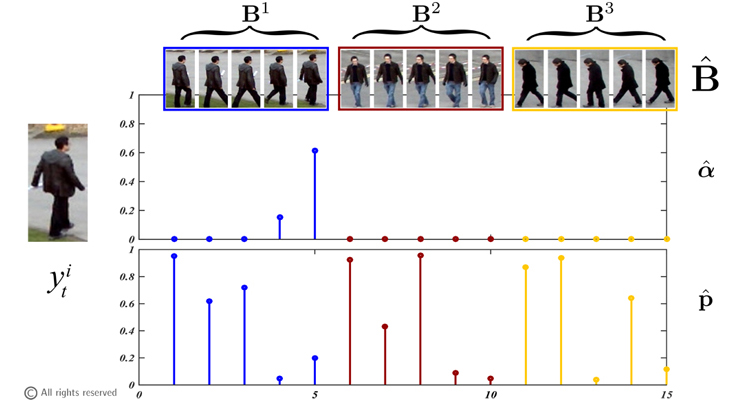 Multi-target visual tracking is the robust and accurate prediction of target locations in video streams. It is a fundamental component in many video surveillance systems which must identify and localize people, cars, and other moving objects in real time. Depending on the application scenario, a video surveillance system might be required to track targets over short sequences (e.g. in tightly-controlled and well-defined areas), or for very long sequences (e.g. in large and relatively constrained scenes).

One of the most important tasks related to Computer Vision is visual object tracking. The task of multiple target tracking is to follow targets in an uncontrolled environment (Figure 1) while at the same time handling problems such as occlusion, similarity in the target appearance and crowded scenes.

Figure 1: The data association problem. At each time instant observations y must be associated with one of the running trackers ⍵.

Figure 2: Sparse basis expansion. An observation y is reconstructed in terms of a basis of tracklet observations.

The data association (DA) problem is one of the main hurdles to be overcome in multiple target tracking and consists of finding the right assignment between the set of tracked targets and the set of new observations extracted from the current frame of a sequence. This task may become difficult in real-world scenarios due to many problems that may arise. One problem is how to create a representation that discriminatively models each target through time, while another is how to build an accurate rule for discerning each subject from the others in the scene. Moreover, if we consider real time constraints, data association must scale well with the number of targets.

The key idea behind our approach is the construction and use of a discriminative basis B (e.g. Figure 2) used in a regularized optimization problem to perform a sparse reconstruction of an unknown target. Our local data association phase only considers the current frame and current set of tracklets. It relies on the solution of a regularized basis expansion problem to determine the possible association of new detections to existing tracklets. We maintain a discriminative basis for each tracklet, composed of the features computed from all detections associated to the tracklet. The discriminative basis B is used to perform a sparse reconstruction of an unknown detection, obtaining reconstruction coefficients. More precisely, the coefficient strength (lower part in figure 2) indicates which basis vectors of a tracked target contribute most to the sparse reconstruction. These coefficients are used in our system to verify how much affinity there is between the new detection y and each tracklet k. 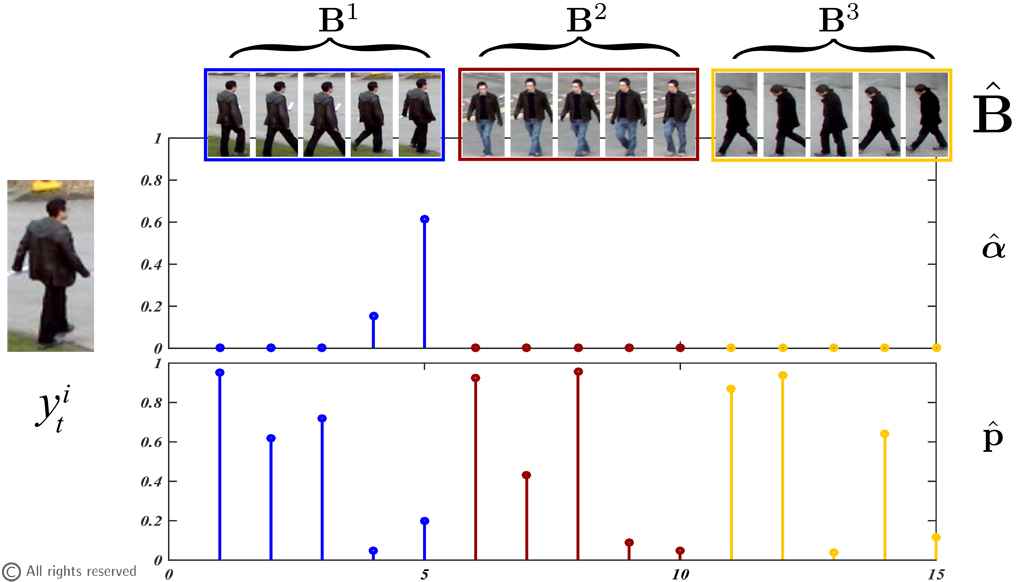 During the multi-target tracking process multiple trajectories are created. It may happen that more than one corresponds to the same subject. This problem is referred to as tracklet fragmentation, and to resolve these types of problems, we define the global data association phase. Our approach estimates a compatibility score C between existing tracklets in a leave-one-out manner and merge them by a greedy pairing if this score is high. The computation of the compatibility scores is based on a weighted version of the regularized reconstruction already being used for local data association. To estimate the compatibility between existing tracklets we prioritize the templates of each sub-basis that are used most frequently during the tracking process and can thus be considered as more representative (e.g. Fig. 3). The proposed approach obtains good results comparable with the state-of-the-art on two benchmark datasets. Our ongoing research is focused on integrating global and local data association into a single, continuous framework that obviates the need to run global association at arbitrary intervals during the tracking process.