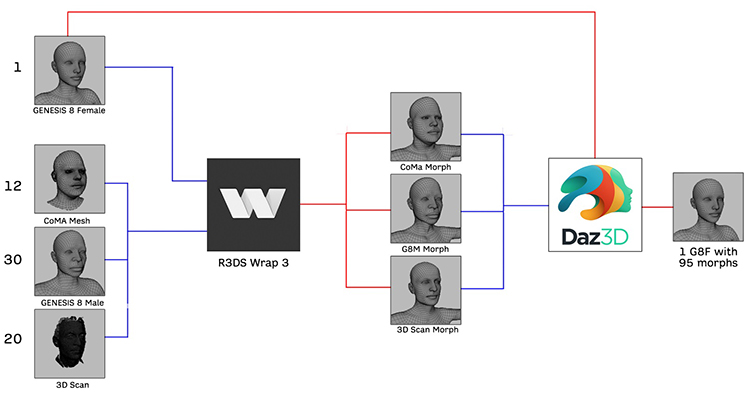 Human facial expressions change dynamically, so their recognition/analysis should be conducted by accounting for the temporal evolution of face deformations either in 2D or 3D. While abundant 2D video data do exist, this is not the case in 3D, where few 3D dynamic (4D) datasets were released for public use. The negative consequence of this scarcity of data is amplified by current deep learning-based methods for facial expression analysis that require large quantities of variegate samples to be effectively trained. With the aim of smoothing such limitations, in this paper we propose a large dataset, named Florence 4D, composed of dynamic sequences of 3D face models, where a combination of synthetic and real identities exhibit an unprecedented variety of 4D facial expressions, with variations that include the classical neutral-apex transition, but generalize to expression-to-expression. All these characteristics are not exposed by any of the existing 4D datasets, and they cannot even be obtained by combining more than one dataset. We strongly believe that making such a data corpus publicly available to the community will allow designing and experimenting new applications that were not possible to investigate till now. To show at some extent the difficulty of our data in terms of different identities and varying expressions, we also report a baseline experimentation on the proposed dataset that can be used as baseline.

The dataset will be available for download in mid / late December.

We identified a key missing aspect in the current literature of 4D face analysis, that is the ability of modeling complex, non-standard expressions, and transitions between them. Indeed, current models and datasets are limited to the case, where a facial expression is performed assuming a neutral-apex-neutral transition. This does not hold in the real world, where people continuously switch between one facial expression to another. These observations motivated us to generate the proposed Florence 4D dataset.

Combining the identities from the three sources indicated above, we obtained an overall number of 95 identities, 43 females and 52 males. To provide identities with the same topology as the CoMA dataset (i.e., 5,023 vertices and 9,976 triangular facets), we used a workflow that involved the joint use of the DAZ Studio and R3DS Wrap 3 software to homogenize the correspondence of the identity meshes. All identities were converted into morphs of the DAZ Studio’s Genesis 8 Female (G8-F) base mesh using the Wrap 3 software that allows one mesh to be wrapped over another by selecting corresponding points of the two meshes. The wrapped meshes were then associated with the G8-F mesh as morphs. At the end of the process, we got a G8-F mesh with 95 morphs of different identities.

After animating the facial expressions and before exporting the sequence of meshes, we restored the animated G8-F to the original topology of the CoMA dataset.

With the basic Genesis 8 mesh, we also got a set of facial expressions, in the form of morphs that we used for our dataset. The number of presets was expanded by downloading free and paid packages from the DAZ Studio online shop and from other sites.
The base set included 40 different expressions. A paid package of 30 more expressions was added, obtaining a total of 70 different expressions. These expressions were classified according to the Plutchik’s wheel of emotions.
Following this organization of expressions, we generated a set of secondary expressions from the eight primary ones (for each primary expression, the number of expressions per class is indicated): anger, AR (6), fear, FR (6), sadness, SS (13), disgust, DT (9), surprise, SE (11), anticipation, AN (4), trust, TT (6), joy, JY (15).

In the dataset, we named the expressions with pairs of names representing the abbreviation of the primary emotion and the facial expression represented, e.g., JY-smile or SE-incredulous. The Genesis 8 mesh also has 70 morphs of facial expressions available, in addition to 95 identity morphs.

The meshes in a sequence are named with the name of the expression and the number of the corresponding frame as a suffix (e.g., Smile_01)

Meshes in a sequence are named with the initials of the primary emotions to which the two expressions involved in the animation belong to, followed by the name of the first and second expression plus a numeric suffix for the frame (e.g., AN-AR_Confident_Glare_01).

In total, we release the 6,650 sequences that show a neutral-apex expression-neutral transition. For the sequences with neutral-expr. 1-expr. 2-neutral transition, all the possible expression combinations have been generated for a total of 198,550 sequences. We also note the neutral-expr-neutral sequences include 60 frames each, with the apex intensity for the expression occurring around frame 30; 90 frames are instead generated for the sequences with an expression-to-expression transition, with the expr. 1 apex and the expr. 2 apex occurring around frame 30 and 60, respectively.
Please, if you use the dataset cite our papers as follows: