The first EUscreen Open Workshop on metadata schemes and content selection policies was held in Mykonos, Greece, on June 23 and 24 and recorded the presence of more than 60 participants. During the two days were scheduled presentations on the development of European projects including the European Film Gateway (EFG), WeKnowIT, NoTube, PrestoPRIME and on the activities of major research groups such as the European Broadcasting Union (EBU), the World Wide Web Consortium (W3C) and the European Data Model Working Group (EDM Group). 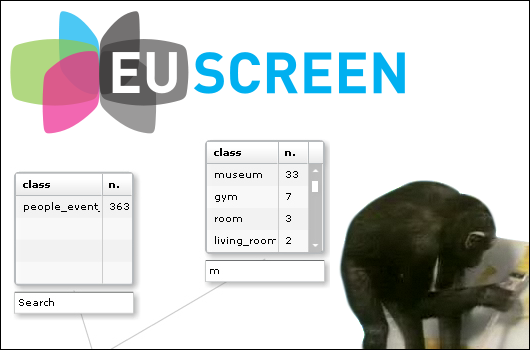 Marco Bertini, assistant professor at the Media Integration and Communication Center of the University of Florence has reported on the activities of two European projects, Vidivideo and IM3I, that involve our center.

The Vidivideo project aims to develop and integrate components for machine learning, audio event detection and video processing in an audio visual search engine that exploits informations from several sources: automatic and manual annotations of keywords and metadata, audio and visual data, speech and explicit knowledge.

Marco has presented a method, used in both projects, to add metadata to multimedia material through automatic annotation of occurrences of concepts.

Within the Vidivideo project classifiers were trained on 1000 concepts and were able to extract metadata from audio and video material. This type of metadata extraction allows a user to search and visualize sequences of video frames exactly where a particular concept was detected. This technique offers high performance, but has some problems of scalability.

The IM3I project is trying to reduce the execution time using a very limited set of concepts and creating less fine-grained metadata. Marco, in his presentation ,shows the current debate existing among archivists in metadata extraction, notably time versus quality.