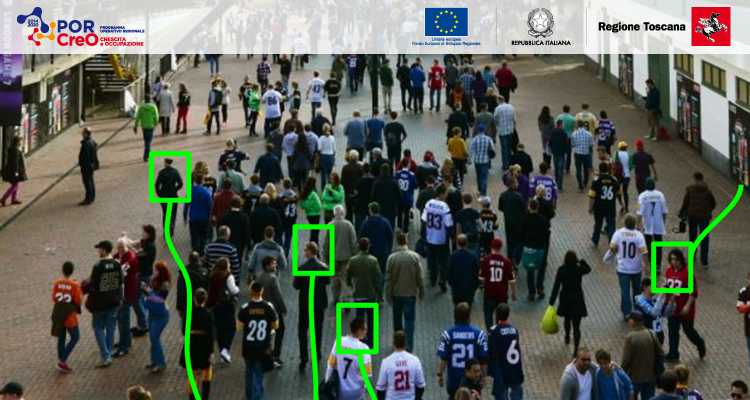 eSERVANT. Project co-financed under Tuscany POR FESR 2014-2020. Analysing, monitoring and connecting people in large facilities. The eSERVANT project was led by QUID Informatica S.p.A and was carried out in collaboration with the partners Sokom srl, Sintra Consulting srl, Magenta S.R.L. and the DIISM of the University of Siena.

The goal of this project is to design and develop a framework for analysing, monitoring and connecting people in large facilities such as arenas, convention centers and stadiums. Here at MICC we are leading the computer vision tasks such as people detection, flow analysis and anomaly detection, and user profiling for social networking.

The goal of the eSERVANT project is to design and develop a framework for analysing, monitoring and connecting people in large facilities such as arenas, convention centers and stadiums. These are scenarios where people are connected by similar interests, like a concert or a sport event, and their behaviors in such large facilities are influenced by and may influence other people mobility. Here at MICC, we are leading the computer vision tasks such as people detection, flow analysis and anomaly detection. The key idea of the project is to use advanced computer vision algorithms to detect and monitor the user mobility in this crowded scenario. User profiling is then used to connect and suggest content to the user through a local social networking application.

During the project MICC have completed the activities related to the study, analysis, design and implementation of the three main modules that to be produced by MICC:

Video Analysis Module: the module serves several application scenarios for the eSERVANT platform which span from the estimation of flows of people to prediction of trajectories and detection of anomalies. Through the use of cameras we want to predict the behaviour of aggregations of people within the facility. The system’s internal routing system module isthen informed to prevent queues and overcrowding. Detection of anomalies, on the other hand, requires the use of cameras present in the facility to create a statistical model of the typical behaviour of the public.

Social Networking Module: social networking functions within the eSERVANT platform have been analysed, defined and implemented; application scenarios were designed that will make use of implemented data extraction services from the social channels Facebook, Twitter and Instagram associated to the user. These scenarios regard the creation and recommendation of users for groups for pre and post-event activities (with particular attention to the similarity of profiles and preferences between users) and car sharing (which will instead take greater account of geographical and sensing information concerning people who will participate to the event).

Indoor Routing Module: regarding solutions for indoor routing we evaluated different technologies including: integration with google maps indoor, use of third-party Saas services and open source solutions. We have identified, modified and deployed an open source platform which allows multilevel routing, maps and routes visualisation. The module exposes APIs for system integration, provides management of multiple buildings and rooms.Methods for optimisation and customisation of routes have been designed in order to take in account data coming from the Video Analysis Module.