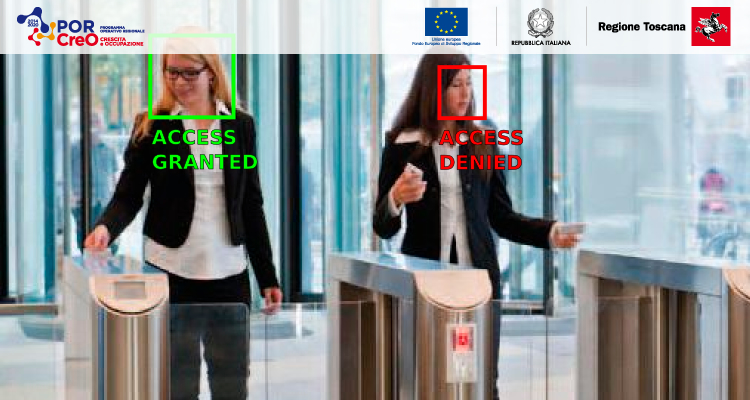 The MAPPER project aims at developing an integrated system to identify, count and track people inside buildings where access and security controls are not negligible. Access controls usually require physical barriers or personnel that represent both a risk in emergency cases and an obstacle in the natural use of the space. The main goal of the MAPPER project is to remove such limitations by developing a system based on the concurrent use of diverse technologies.

In this project MICC is involved in developing the facial recognition system. We aim at developing a flexible and scalable system using computer vision techniques to recognize people using facial recognition algorithms. Together with our partners we will develop a prototype that will seamlessly integrate with existing access control portals counting, recognizing and locating people.
Recent technological advancements in the computer vision field brought by Convolutional Neural Networks are opening the way to the development of effective facial recognition systems that can operate in non cooperative contexts. We will design and develop a system, involving possibly multiple cameras, in order to recognize faces at a distance so as to remove to a great extent the need of physical barriers.

In the first few months we focused on USE CASES: scenarios in which the MAPPER project will be implemented involve structures where critical operations are concerned. These can be banks or facilities where potentially dangerous materials are stored, to mention some. In all the cases, the critical point is that many users with different levels of privilege share the same spaces. In this context some users may or may not access a certain area ( or floor ) and different users may have different level of access based on some criterion. The developed system will be able to grant access to functional areas to users that are allowed or, on the contrary, throw a signal and track the intruder inside the area. This also stress the importance of the use of concurrent technologies and diverse systems.

The face recognition module is located onto the gates, which are equipped with one or more cameras, pointing in both directions (in/out). The task consists in detecting the transition of the subjects into the gates and recognize whether the subjects are allowed to enter or not. To this aim, the cameras detect the subjects while they approach the gate, locate the faces and start to track them, accumulating information on their appearance. Once the faces disappear from the frame, the system process the accumulated information, and recognize the user. If the latter does not belong to the set of registered subjects, the systems throws an alarm and stores the collected images and related information. A prototype of the gate equipped with the cameras is shown in Figure 1.

IEEE Computer Society Workshop on Biometrics in conjunction with the International Conference on Computer Vision and Pattern Recognition (CVPR), 2017