The ALIEN visual tracker is a generic visual object tracker achieving state of the art performance. The object is selected at run-time by drawing a bounding box around it and then its appearance is learned and tracked as time progresses.

The ALIEN tracker has been shown to outperform other competitive trackers, especially in the case of long-term tracking, large amount of camera blur, low frame rate videos and severe occlusions including full object disappearance. 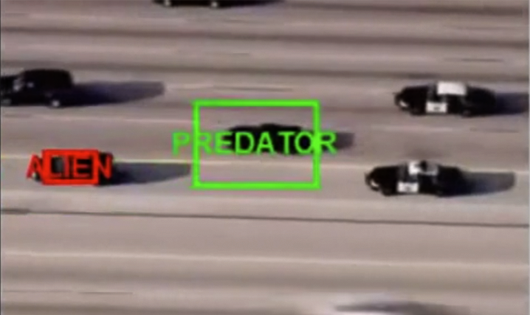 A real time demo of the released application will also be given during the conference.

Application Demo: here we are releasing the real-time demo software that will be presented and demonstrated at the conference. Currently the software is only working under Microsoft Windows 64bit. The released software demo has been developed using OpenCV and Matlab and deployed as a self installing package. The self-installer will install the MCR (Matlab Compiler Runtime) and will copy some OpenCV .dll files and the application executable.

Note: There is no need to install OpenCV or Matlab, the self-installing package will provide all the necessary files to run the tracker as a standalone application.

How to get the best performance: try to avoid including object background inside the selected bounding box:

It is not important to include the whole object; some parts may be left out of the bounding box: