A technology transfer project for an international exhibition about the story of Onna, an italian town near to L’Aquila, which was affected by the earthquake during 2009.

A natural interaction based system is designed and developed in order to present a large number of multimedia contents (videos, images and audio) collected and created by the curators of the exhibition. 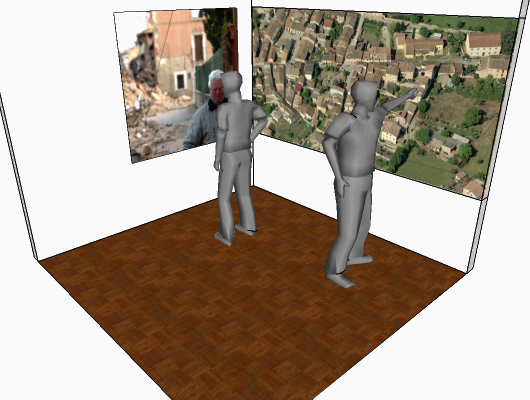 Interactive system scenario in the Infobox at Onna

The project involves the study and development of an interactive system which adopts the paradigm of the natural interaction in order to allow users to access and consult multimedia contents related to different areas of the town of Onna, an italian town near to L’Aquila, which was affected by the earthquake during 2009.

The concept proposed for the user-interface is inspired by the educational game book published in the seventies about the devastation of the town of Pompei after the eruption of Vesuvius in 79 B.C. The pages of the book are composed of images of the destroyed Pompei which can be overlapped with images of the town before the eruption.

The user-interface will be optimized in the environment of the exhibition in order to allow multiple users to interact independently with the system.